You are here: Home / Archives for s is for snake

Looking for a fun craft to go with the letter S? How about an S is for Snake hand print art craft?! You may also like this letter of the week snake craft to make along with this one. Plus, at the end of the post there will be a snack suggestion, free printables, book suggestions, and more. 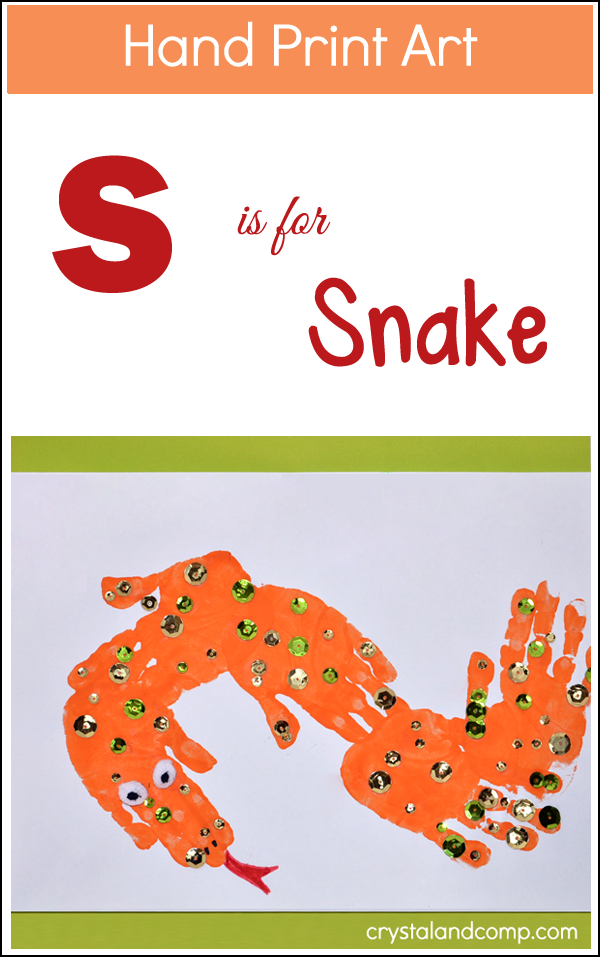 My preschooler loved making this snake craft! Besides learning about the letter S, it also gives them practice with gluing and the added sequins give them fine motor practice. She tends to squeeze way too much out so I let her know before making the glue dots to try to make them the same size as the sequins or smaller. 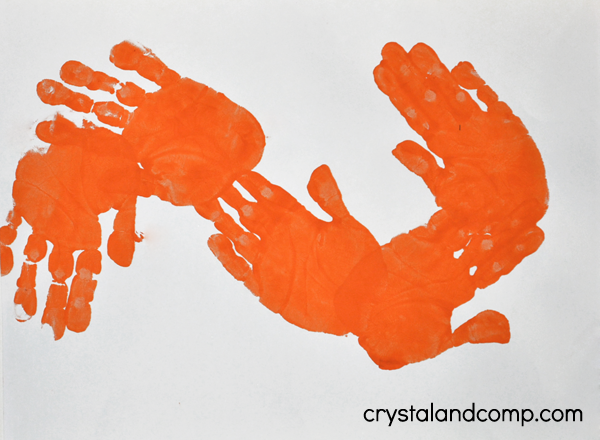 Start by having the child paint their hands orange. My daughter painted her left hand and then rubbed the two together. Make 5+ handprint in a curvy snake shape. The handprints should all be touching each other. Let dry. 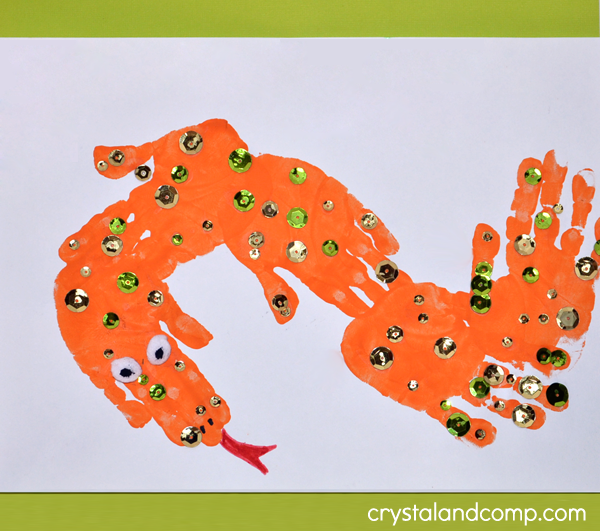 Have the child make dots of glue all over the snakes body, as many as they’d like. Add sequins to the glue dots. We used green and gold in 3 different sizes. Instead of add sequins, you could add buttons or gems. Fingerprints would also be fun!

Draw on a tongue with red marker. Write “S is for Snake” across the top. 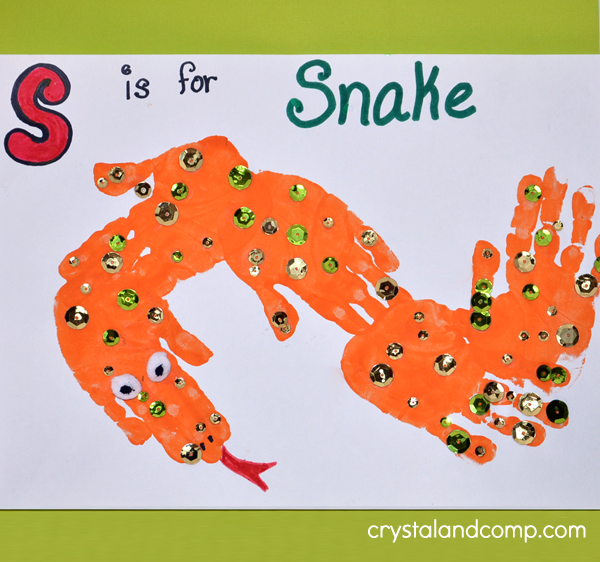 Looking for more activities to go with your hand print art? Check out all of our letter of the week activities for kids below!

Letter of the Week Activities for Preschoolers (Letter S)

Check out these Handwriting Practice Worksheets for alphabet learning with your preschooler! 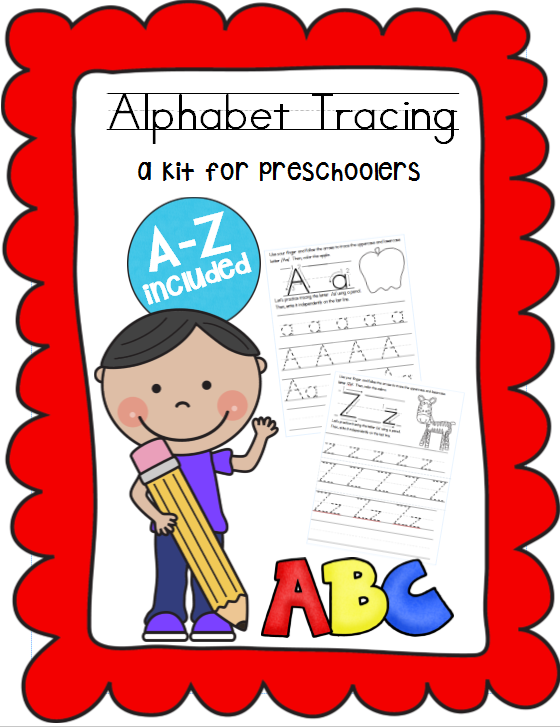 I’m Anna from the Measured Mom, bringing you yet another activity in our Letter of the Week craft series at Crystal and Company.  This is one of my kids’ favorite crafts to date – I hope your kids love it too.  Who wouldn’t love painting with spaghetti?  Be sure to head to your library to check out the book recommendations at the end of the post. Try to find some time for those rhymes and songs too!

LETTER OF THE WEEK: S IS FOR SNAKE CRAFT

1. Use the kitchen tongs to put the cooked spaghetti into three different bowls.  This is great fine motor practice – but if your preschooler likes to get messy, turn it into sensory play instead and let him scoop it with his hands!

2. Choose three colors of paint.  Squirt a little into each bowl. (Mom did this step at our house :)).

3. For fine motor practice, lift the spaghetti with the tongs and drop it back in the bowl.  Repeat a few times until the paint is mixed in.  For messy sensory fun, mix with your hands!

5. Dump the spaghetti into the lid!

6. Tip the box back and forth until you’ve painted the S with spaghetti.

8. After a few hours,cut out the S and glue it to a piece of plain construction paper.

11. Here they are!  All our S’s look the same because each of the kids chose red, yellow, and orange. 🙂  Those colors do make pretty snakes!

This was a new rhyme for me. It’s so fun to say!

Here’s a classic nursery rhyme that all kids should know:

Lots of letter S’s in this one!

BOOKS TO READ FOR LETTER S: 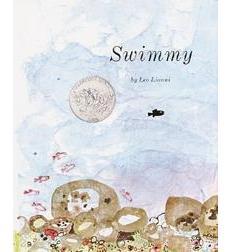 Swimmy is a little fish whose friends are swallowed up by a giant predator.   When Swimmy joins a new school, he helps his friends swim together in the shape of a giant fish so that they can outsmart their enemy.  It’s an engaging story with a great lesson – work together to make the best of a bad situation! 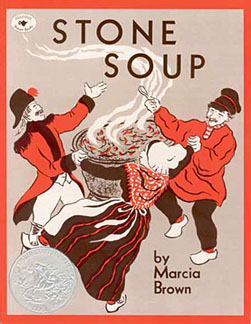 My six-year-old still can’t get enough of “Stone Soup” variations.  This old folktale tells of hungry travelers who ask a woman for food. When she refuses, they decide to make stone soup. A stone goes into the pot – but it needs just one thing more.  When the woman is tricked into providing one thing after another, the stone soup becomes hearty and delicious! 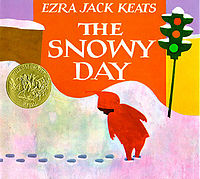 This vintage story is by that master of childhood, Ezra Jack Keats.  Children enjoy the simple pictures and can relate to Peter’s day making snow angels, catching snowflakes on his tongue, and throwing snowballs — unless they live in a very warm climate. In that case, this book will make them wish they had snow!