As I’ve shared with you guys before, this year we made a leap of faith in regard to big kids’ education (Garrett and Anthony).

As a long time, heavily involved, avid supporter of public school, at the end of last school year I found myself at this fork in the road. This place I was not so sure of.

Our second grader, Anthony, was finally diagnoses with Dyslexia, something I had been begging the school to test him for going on two years. I just knew he was. I did not know much about the ‘learning difference’ but what I did know about it, supported my gut feelings.

You can read more about his diagnosis with dyslexia and my struggles with education here.

Over the summer we applied for both boys to go to a local charter school that is science and engineering based, which is exactly what Anthony needed. Like his father, he is very hands on.

Unfortunately it is a lottery. There is no sibling grandfathering. Garrett’s name was drawn, but we are still waiting for Anthony.

With all of that said…. (get.to.the.point.Crystal) it is science fair season.

In September my little attorney, Garrett, chose his topic- How Junk Food Effects a Hamster. (He had been begging for a hamster for months and months…what a creative way to finally get one! Or two!)

We purchased two hamsters- one went to Anthony and one to Garrett but both were used for the project.

Let me tell you a little bit about Garrett’s personality.

He can be a procrastinator.

He loses interest easily in things that last too long- like a 6 week hamster study.

He expects instant gratification (what child doesn’t in 2010).

He will make a great attorney some day.

Let me tell you a little bit about Garrett’s mom (me).

She is cross between a helicopter mom and a drill sargent mom.

She hates to see her children fail.

Despite the above, she really wants them to do things for themselves.

(Ok, it is weird to write about yourself in third person!)

So, in the end, this project became just as much my project as Garrett’s. He was so over it! Although I helped him, I did not let him off the hook. Not one bit.

We logged the food we fed them, how much they weighed before, during, and after. We also recorded their physical activity throughout the 6 weeks. 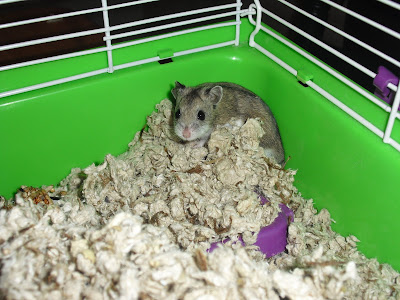 (I understand the last three items are not seen as junk food to the human kind, but it is not hamster pellet food…. so, we considered it junk food. And since the research was funded by Crystal & Co., we controlled the research being done. Welcome to America.) 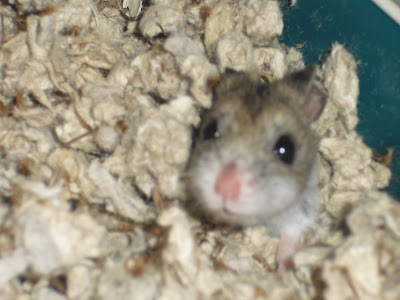 Soon it was time to assemble the poster board. This is where I really lost Garrett. It was like a long car ride- ‘are we there yet?’. But instead it was ‘are we done yet?’. It was clear to me that Garrett and I lacked a meeting of the minds.

Garrett was fine with just throwing everything on the board and turning it in. Oh, boys lack such detail!

Decorating the board absolutely annoyed him. But we did it anyway.

Helicopter mom continued to march out the orders. 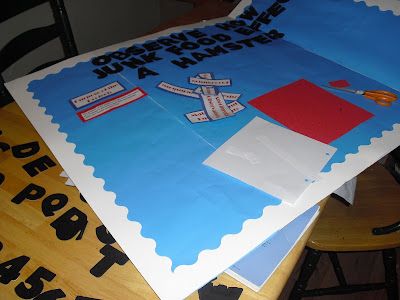 See those cool letters? They are like post-it notes and sticky only at the top. Then you can glue them down. Perfect for a science fair board! Highly recommended for a project like this. And, they are affordable, too! Got them at Target back in January. Anthony wanted to help. So his job was to sort the letters and numbers out on the table in an organized way. He did a great job! (We had kind of messed them up at this point…)

In the mist of all of this, Anthony remembers he has a project due the next day. This kind of thing used to drive me absolutely insane! Then, I embraced dyslexia. It is just how his mind works.

And I know what you are thinking… didn’t the teacher send home a note about it?

Of course she did.

Did Anthony bring it home?

Of course he did not!

Again, we embrace it. My life has adjusted. We roll with it. We keep in touch with the teacher as much as possible. Still, things fall through the cracks.

(As a quick side note, we asked at the beginning of the school year that Anthony be assigned a buddy. This can be common for children with learning differences. The buddy reminds Anthony at the end of the day to check his box for homework, to check for papers to take home, etc. Still things get overlooked. You just have to accept it,move on, and encourage him to try harder!)

So, we had a project going on at the kitchen table (science fair) and in the living room (musical instrument). Thank God Lenny was home this night, it was a slow night for heating and air conditioning business.

Lenny supervised the living room project(s). It looked at little something like this…. 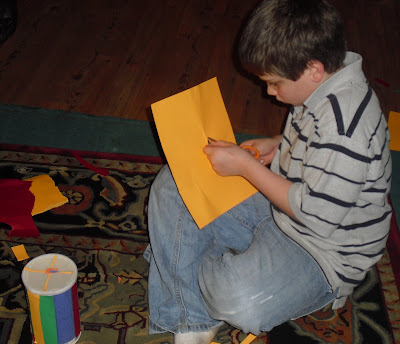 Then, the twins decided they too had ‘homework’. They love to pretend and do school work.

Here is Luke doing his homework. Excuse his non-matching stripes. I am pretty sure he dressed himself that day. Remember, we are just surviving some days. 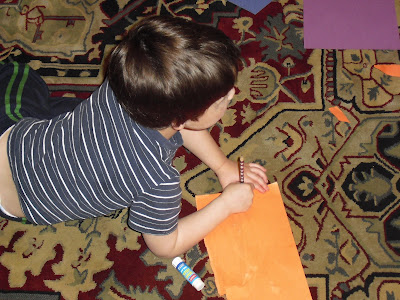 And here is Nick. Yes, those are big people scissors in his hand. I noticed them as I was taking a picture. Pretty sure that is why he would not look at the camera…. he knew he was doing something he should not be doing! Don’t worry, they were recovered immediately. 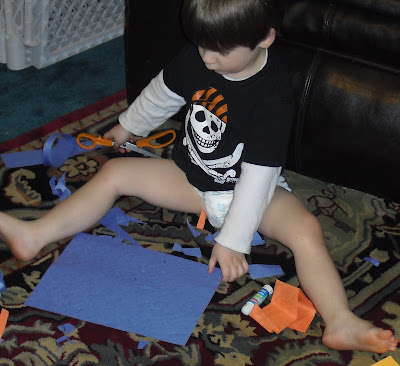 And apparently Matthew’s homework was to push the kitchen chairs from the kitchen to the living room.(Look at all the fingerprints on that chair. Do we have to pay someone to clean around here?) 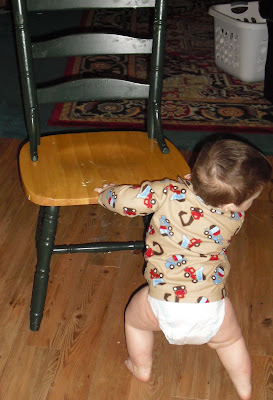 See what an empty oatmeal container with a little bit of rice inside, some card stock, a glue stick and a creative mind can do? These projects are perfect for him. He learns with his hands! 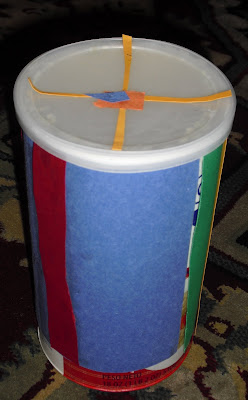 Proud dad and son! (Yes, Lenny is running for a public office. More about that another day.) 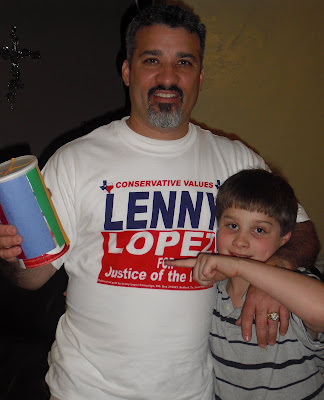 Back in the kitchen- science fair things are underway. It was a late night. Here is the finished board: 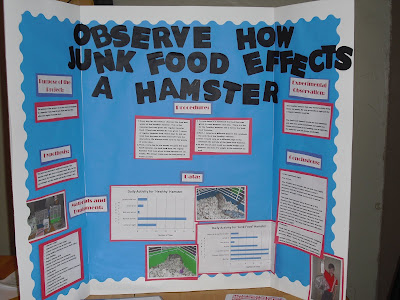 Here is our data notebook and result binder with some cool spreadsheet stuff inside. 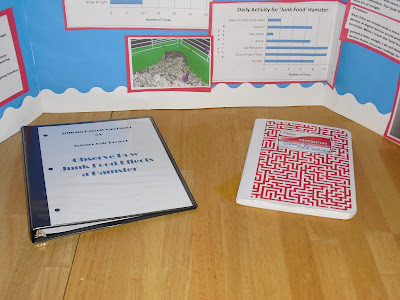 And what happens when you feed a hamster too much junk food? He turns into this… just kidding! 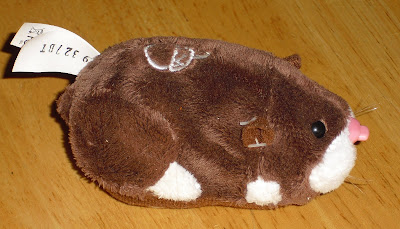 Garrett proudly turned in his project and actually was chosen to move on to the next level. It required that he be at the school that Saturday for the day long Science Fair event. (He was so tired, can you tell?) 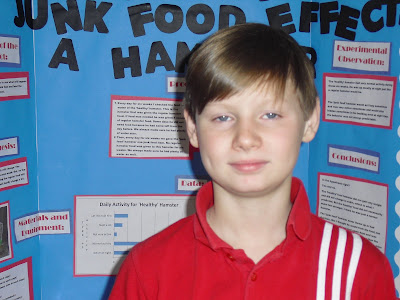 It was Garrett’s dad’s weekend to have him (blended family joys) and they had other plans… so he was not able to make it.

There was lots of disappointments, but Garrett really learned a lot from this project! Lenny and I took the little kids and went to the Science Fair event even though Garrett could not make it. He did not place in the second round, but we were so proud of his work.

There were so many amazing project. I took pictures to share as ideas for projects you may have in the future. These kids are brilliant and inspired us all to look at science in a whole new light. Remember, our future is on their hands.

(Garrett’s school currently goes up to 8th grade… I think many of these are from the upper grades.) 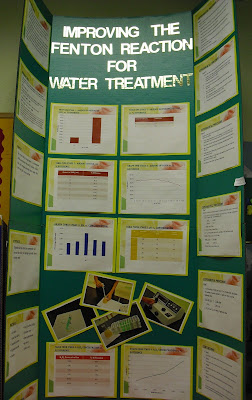 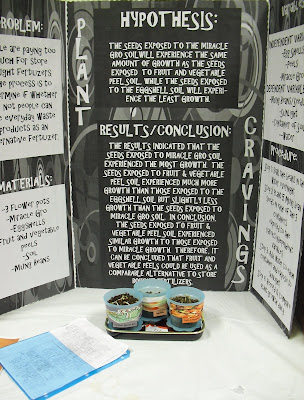 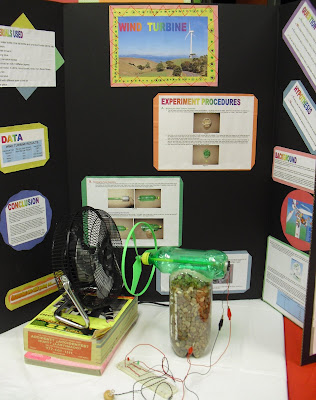 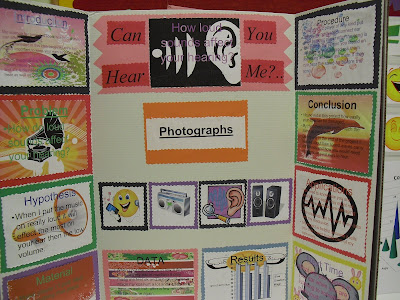 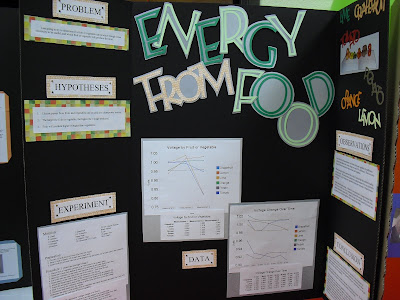 Do you have a science fair coming up? Here are some very helpful links:

Putting Together Your Display Board

The Scotch Tape people have a website called Science Fair Central for helping you through your project. Awesome!

Then there is a book- Guide to the Best Science Fair Projects. Wish I had seen this before we got started… will totally get it for next year.

Are you new to Crystal & Co and do not want to miss a post, subscribe to my RSS Feed!
Crystal VanTassel-Lopez